Visceral Belly Fat – The Abdominal Fat That Can Kill You!

Belly fat or visceral fat is the most dangerous fat on your body!

My jaw dropped a few times during my research on menopause belly fat – no kidding!

It’s the fat that’s behind your abdominal wall and it’s also the padding that surrounds your internal organs. Described as “an express lane pass to your heart and other important organs”, that’s exactly where the health dangers of carrying this excess abdominal fat begin.

Some of us store fat up higher in the rib cage, and others store it lower in the abdomen, but regardless of where it is, abdominal fat doesn’t just sit there and do nothing.

Heck, no. It’s busy…it’s active….it’s wreaking havoc in your body and ultimately it can do some significant damage to your health!

Curious to know what that visceral belly fat is busy doing?

Interestingly, it takes on a life of its own and almost functions like its own separate entity or a separate organ, releasing some nasty stuff into your body that, if left to its own device, can and will eventually cost you your health.

For example, it releases free fatty acids that impair your ability to break down insulin.

Too much of the insulin hormone in your body eventually leads to diabetes.

Oh, and that’s not all your belly fat is busy doing…

It also secretes substances that increase your risk of heart attacks and strokes.

I agree that abdominal visceral fat is a silent killer – the culprit behind a lot of the common health problems our society is suffering from today.

It conveniently surrounds and makes its home within easy striking distance of your heart, liver, and other organs – feeding them poisons, pressing on them, and generally interfering with your organs’ ability to do their jobs efficiently and keep you healthy.

Want to venture a guess at how many fat cells you’ve got?

The average North American person has – are you ready for this? – about 30 billion fat cells!

Fat cells form armies. They expand and then divide!

When you stuff yourself with greasy, fried foods, sugary empty calorie snacks, et al, you are feeding those hungry fat cells. They get plump and fat and expand – up to 1,000 times their original size.

Once they grow to their capacity, they begin to divide, creating more hungry little fat cells that again expand and divide…and the vicious cycle continues.

As your army of fat cells are growing, expanding and dividing so is your belly growing and expanding, one fat cell at a time.

Once you have a fat cell, you’re stuck with it. So as you get fatter and double the amount of fat cells in your body, it will also be twice as hard to get rid of the ‘lipids’ inside each cell.

Fat cells contain lipids. Lipids are the sticky, greasy substance responsible for gumming up your arteries.

Bottom line, the more belly fat (visceral fat) you carry around with you, the higher your risk factor. This list reads like a horror novel, but it gives you a pretty good indication of the damage visceral fat can create in your body if you don’t take action.

According to David Zinczenko, author of The Abs Diet For Women, overweight people are:

Source by A. D’Angelo

Visceral Belly Fat – The Abdominal Fat That Can Kill You! 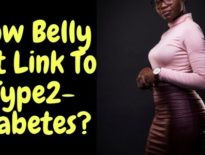 weightloss Do You Know Belly Fat Linked To Type-2 Diabetes?
0